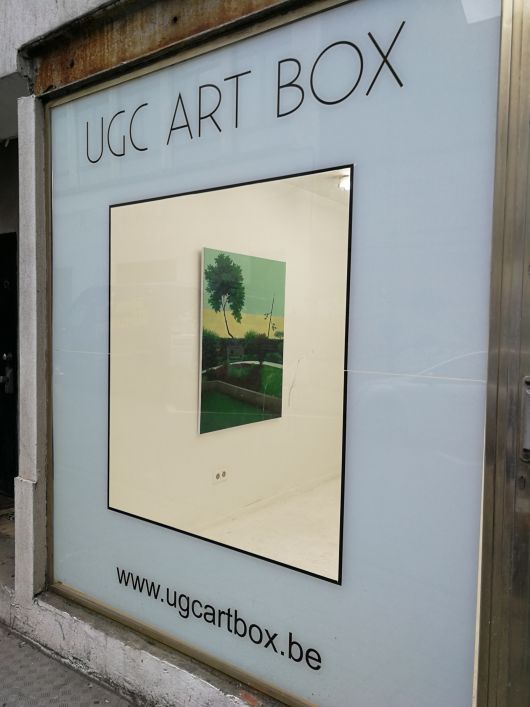 That morning, the blue took over the entire surface of the sky, without contrasts or shades. The wet grass reflected more or less its light which was diffused in halos through the leaf of the sleeping lime tree. From this corner of monochrome sky came out a pictorial brightness with a mineral softness which brings on me a familiar feeling.  In a motionless space, there was no more blue over the Square Jean Ferrat but a green light which came out.

7.15 in a green bordered morning. On the balconies, behind the plane trees strewing the rue Bordier, began the rumor of the city’s awakening. I crossed my hands behind my back to stare better.  It was essential to enjoy a little longer this inconspicuous body levitation. And when the first cries, that the space will transform into an urban symphony, will come to me, I will go back to les quais de la station Quatre Chemins, in this mix of boredom and singular drunkenness.

This is how the painter Dorian Cohen take us to the edge of the city, to these places of convergence where we never meet. Squares, parks, suburbs, bridges, motorway junctions, outlying areas; where the pattern brings art at the heart of this urban spaces as to rewrite the story, Dorian Cohen makes of this commonplaces his own piece of art. As per a renewed approach of the Italian Renaissance’s Masters, the painter wanders in the public space and reveals to us the beauty of these converted landscapes with a luxuriant but contained greening evoking a biodegradable end.

Painted by split touches in the Cézanne style, the colors – those of the dawn or the twilight - strangely plunge these epicenters of banality into a form of mysticism. The perceptible echo of a tumult fled with human life supports the purpose. This is how the dream settles in the urban spaces where Dorian Cohen's still-life belong. These, almost natural, routine infrastructures places without any comments under the gaze of the viewer, invite the mind to move. Creating a floating soul, beauty then reveals itself in violation of the laws of indifference. Unlike some of these distinguished Dutch predecessors, Dorian Cohen's still-life do not have any petty bourgeoisie ambitions.

These urbanities are neutral zones, places of passage or rallying points before dispersion, where each is united by the sole bond of a common destiny. From their mystified banality, Dorian Cohen's works perhaps express the most universal and primitive of values: the fact of existence. “Même le ciel sera vert” is high-speed one-way to those urban natures that some thought dead, where daydream and remembrance have the closest ties.